At last, my new Regency romance, Love And The Unexpected Duchess, has been released. I seem to have been working on this novel forever… I hope you enjoy it.

Love And The Unexpected Duchess is the first novel in a new series, the St Carterets. This novel is the story of the new Duke of St Carteret and his Duchess.

In the second novel, the Duke’s sister, Lady Peyton, who appears in the first novel, has her own love story.

(Although it’s a series, each novel may be read as a standalone.)

Here’s a short excerpt from Love And The Unexpected Duchess .

When she stepped from the carriage Flick gripped her reticule in both hands and stared upwards in awe at the tall mansion in fashionable St. James’s Square.

“You go in, Miss Marchant,” Mrs Bridger’s coachman called down to her. “I’ll tool the horses around the streets for half an hour. Can’t leave them standing in this chill breeze—you’ll be all right?”

Flick nodded. Her heartbeat thudded in her ears.

Swallowing hard, she repeated the words she’d rehearsed: My name is Felicity Marchant, of Morton Marchant. May I speak with His Grace’s secretary, Mr Corbet?

Telling herself that she wasn’t intimidated, Flick straightened her bonnet on her head and squared her shoulders. She could do this. She must. If the butler or another lackey looked down his nose at her and asked why she wished to see Mr Corbet, she would simply say, “It’s a legal matter—I will discuss it with Mr Corbet. Thank you.”

No matter how frightened she was—and she admitted she’d passed intimidation without a halt and was well on her way to terror—she had to do this.

At the foot of the steps she froze. Thoughts fluttered through her mind like butterfly wings. One thought: just as well she couldn’t move, otherwise she’d run away. She wouldn’t stop running until she was home at Morton Marchant.

Another thought: what if she couldn’t move at all. Ever? How long would they allow her to stand here before they called someone to take her away to Bedlam?

Behind her, the horses moved restlessly, their hooves striking the cobbles and their harness jingling as they chewed their bits. “Miss Marchant?” The coachman raised his voiced and called out to her again. “I’ll wait until you’re admitted—I’d knock on the door for you, but I’ve no one to hold the horses…”

Although aware that the coachman had spoken, Flick was focused on her thoughts. If only her father were still alive. When her father died almost eight months ago, he left a mass of debts and no money at all. Her fiancé promptly cried off—he hadn’t loved her as he’d assured her. The realization that he’d only wanted her for her dowery was lowering.

Worse of all, she and her two siblings would soon be homeless. Morton Marchant was entailed on a distant cousin of their father’s.

With probate now granted, her father’s solicitor informed them they’d have to leave their home. The cousin had sent word that he would like to inspect his new property.

“As you instructed, I’ve written to his solicitor to say that you would like three months to vacate Morton Marchant, Miss Marchant,” the elderly solicitor told her. “But the attitude of your cousin’s legal man and his man of business is not encouraging. Perhaps you might stay with friends… The heir wants vacant possession as soon as he can get it.”

She informed the solicitor that they’d leave as soon as they could. Then, with tears rolling down her face, she left his office.

A month later, Flick stood at the steps to St Carteret House because she had no choice. Her brother and sister and Aunt Hatty depended on her. Hatty, a widow, lived with them, and would join them in homelessness.

She had done everything she could. Desperate, she’d sold the furniture and even some of their clothes. Not that there was much of value left. Valentine Marchant had had the same idea. Determined to gamble his way out of their troubles, he’d sold everything he could carry away.

Love And The Unexpected Duchess is available now.

22-year-old Priscilla Ballantine wakes up 200 years in the past, naked in the arms of handsome aristocrat, and master spy, Dominick de Roche, Lord Bellemieux. Priscilla's accused of spying, and is in danger of summary execution. She can't help thinking that she wouldn't be in such a mess if Dominick de Roche hadn't mistaken her for one of his contacts... 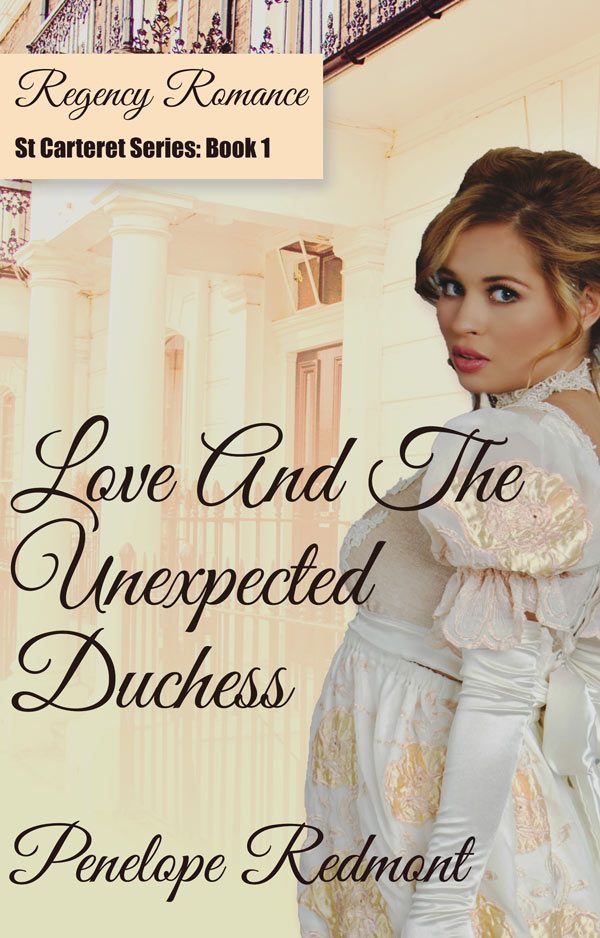